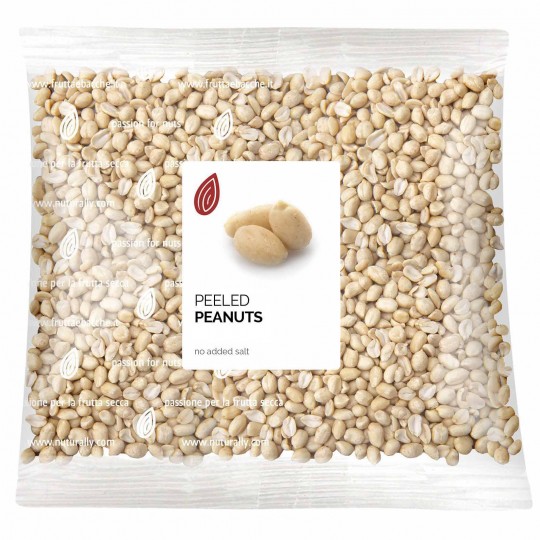 Our natural peeled peanuts are grown with care and attention, respecting our production chain and the values in which we believe: respect for people and for the planet.

You can buy natural peeled peanuts in packs of 1 kg, ideal for true nut lovers.

Natural peeled peanuts selected for you

The Italian name for peanuts, ‘arachide’ comes from the Greek word 'arachos' which is a kind of legume. It is most commonly called either 'peanut' or 'groundnut'. Peanut is a descriptive term and means 'nut in the shape of a pod'; groundnut refers to a part of the plant life cycle and means ‘nut under the ground'. The peanut belongs to the Dicotyledon Class, Rosales Order and Leguminosae Family, which includes 40 species of perennial herbaceous bushy macrotherms originating in the tropical countries.

Peanuts are the seeds of a leguminous plant whose flowers, after fertilization, are buried and form the fruit we are all familiar with. The most well-known species, and also the only one to be grown, is the Arachis Hypogaea. It is characterized by long stems of 20-60 cm, either erect or creeping; the leaves are alternate and compound paripinnate (two pairs of oval leaves) with two large grey-brown to green membranous stipules placed at the base of the long petiole. The flowers are yellow and single, and their ovaries, once fertilization has occurred, push underground to a depth of 2-7 cm (buried gynophore) through a mechanism of positive geotropism. Here it gives rise to an oblong legume, which is 2-4 cm in length, yellowish, and has a series of alveolate ribs containing two or more ovoid and whitish seeds coated with a thin, usually brown or red-violet tegmentum in the form of the peanut we all are familiar with. The plant can produce more than 100 Flowers and mature 20-60 legumes.

The peanut was also commonly used as a substitute for coffee and cocoa. Nowadays, it is mainly used in the industrial production of food oil used for cooking as an alternative to olive oil. Peanuts are rich in nitrogenous substances, oil, nitrogenous extracts, cellulose and vitamin E, Copper, phosphorus, Magnesium, Iron, Selenium and Zinc. With the increase in the use of peanuts in the food industry in Europe, cases of allergy or intolerance to this seed are also increasing. It is also contained in childhood products, as a component of adapted milk or as polivitaminic bulking agents. The main allergens are three proteins (Ara h1, Ara h2, Ara h3), which remain stable at high temperatures and therefore remain active even after roasting or baking. Peanut allergy can be already visible from an early age (in 92% of cases between one and seven years old), with an incidence of 11.8%, which makes it the third most common among the population after milk and egg allergies. However, unlike the latter that tends to disappear, peanut allergy is permanent. The reaction may occur by contact, inhalation and, especially by ingestion. Symptoms of an allergic reaction can sometimes be very serious.

A moderately fat diet that includes peanuts helps losing weight. It has recently been shown that hazelnuts and peanut butter are useful elements in successful slimming diets where people sustain weight loss even after two and a half years. A careful study carried out by Kathy McManus and colleagues at the Brigham and Women's Hospital of the Harvard University included peanuts and peanut butter among the foods with moderate fat content (35% energy from fat) in the Mediterranean-style nutrition program, with a maximum value of 1,200 and 1,500 daily calories for 101 men and women. In the long term, weight loss resulting from the moderately fat diet was considerably better than weight loss achieved with a low-fat diet (20% energy from fat). Hazelnuts and peanut butter help reducing the risk of Type 2 diabetes. Type 2 diabetes is a growing global problem with enormous medical and economic implications. In the UK, 3 out of 100 people have diabetes, 75% of which have Type 2. In the Netherlands, more than 440,000 people have Type 2 diabetes, and the number has been growing. In Germany, specialists have recently warned that the number of diabetics could reach ten million over ten years.

There are generally several million unrecognized diabetics in Europe, meaning that they have not yet been identified or treated. Simple diets, daily exercise and weight loss are important factors in reducing the risk of diabetes. As recent researches have shown, peanuts and peanut butter as part of a balanced diet play an important role. Scientists at Harvard School of Public Health Boston, USA, have investigated the association between the consumption of nuts and peanut butter and the risk of Type 2 diabetes in 83,818 women from the Nurses’ Health Study between the ages of 34 and 59 who did not previously suffer from diabetes, heart disease or cancer, and with more than 16 years of check-ups. They found that eating nuts and peanut butter was inversely associated with the risk of Type 2 diabetes as a function of age, body mass, family history of diabetes, physical activity, smoking, alcohol, and total caloric intake.

The advice provided SHOULD IN NO WAY BE CONSIDERED AS MEDICAL ADVICE OR PRESCRIPTION. The information provided shall be considered for informative and educational purposes only, it is not intended to replace medical advice. In case of a medical condition, always consult your doctor.

The identification of the place of origin of the peanut plant has historically animated a long discussion, since the plant is diffused in three continents: Asia, Africa and America. The riddle wasn't solved until 1855 when the naturalist A. De Candolle noted the absence of the plant in classical antiquity and the Arab world, and its relatively recent introduction to Senegal, Guinea, East Africa, China and Japan, which led to him to focus on the Brazil-Peru area. His theses were supported by the ancient artefacts found in the ancient Peruvian Tombs of Ancon. Based on this, he developed the theory according to which the plant, from a wild form located in Brazil would have arrived to Guinea with the first slave traders, while other transports were operated by the Portuguese navigator Magellan (1519-21) from Brazil to the islands of South Asia, and later the plant entered all other countries where it is grown today.

The cultivation rapidly developed in Africa (where, however, it was entirely unknown to the Egyptians) so much so that for some centuries peanuts were the most common food given to the black slaves on their crossing to the New Continent. The introduction of the peanut to Italy dates back to 1772. Today the major producers of peanuts in the world are China, India, the United States, Nigeria, Indonesia, Myanmar, Chad, Senegal, Argentina, Brazil, Egypt, Israel and Sudan.

Among these, the largest exporters are the United States, Senegal, Sudan, Argentina and Brazil, which together handle 75% of the exports, while China and India, though still producing large quantities of peanuts, export less than 4% of total global output. The largest importers of peanuts are currently the European Union, Canada and Japan: these three areas alone account for 78% of world peanut imports. The peanut belongs to the Dicotyledon Class, Rosales Order and Leguminosae Family, which includes 40 species of perennial herbaceous bushy macrotherms originating in the tropical countries.

According to USDA analyses, 100 g of natural peeled peanuts contain:

Please note that peanuts are included in the list of allergens (Annex 2 Reg. No. 1169/2011 and as amended and extended.)

Each 1kg pack of peeled peanuts contains about 34 portions of 30 g that provide:

Affordable price means to us offering our clients natural peeled peanuts with no added salt that everybody can enjoy.
We want, on the one hand, to place the proper value on raw materials in order to obtain a quality product by paying our farmers a fair price; on the other hand we want to fulfil your needs when it comes to pricing.

Not only that: by choosing large packs of natural peeled peanuts, you are also contributing to the reduction in the use of plastic.

How much does 1 kg of natural peeled peanuts cost?

You can store natural peeled peanuts away from sources of heat and moisture. Here are 4 useful tips:

We recommend that you buy Natural Peeled Peanuts together with these products: 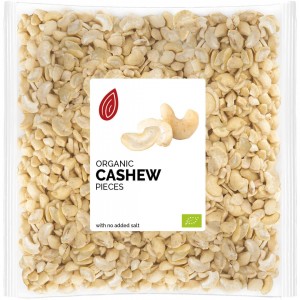 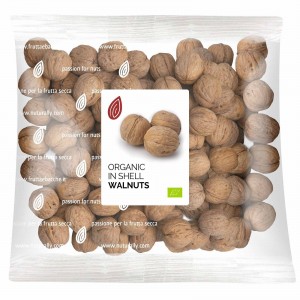